Le Rosé by Antídoto is a rosé developed from its very vineyard, a plot called Carresoto in the village of San Esteban, a plot that grows the autochthonous Tinto Fino and Albillo varieties.

The grapes come from the prephylloxeric old vines of this ‘grand cru’, which grow at a 950 m altitude in a soil composed of a 30-50 cm layer of sand over a calcareous rock bottom, following the pattern of the great champagne, Burgundy and Loire valley whites wines.

The pressing, a process that has now been improved in the new winery, is the same as the one used for Champagne, just only to collect the flower must with which Le Rosé is made. The resulting wine is fermented and aged in new 600-litre barrels.

The first year of vintage for Le Rosé was 2013 and since then it began this rosé wine has been made directly to compete with the world elite of rosés.

Sourdais noticed that Soria was an ideal location, given the tradition of Ribera de Duero and, in general, of the Spanish viticulture of making pale wine, to consciously adhere to the tradition and update the subsequent legacy with Le Rosé, the fully Spanish rosé wine.

At the beginning of the year, the winter was dry. Heat appeared between 18 and 28 February after some snows, but neither the vineyard grass grew nor the buds stood out as the soils and sub-soils were cold.

The sprouting happened on 30 April where the rains came. May brought important frosts on 4th and 6th day.There was also an intense coldness in spring which made the vineyard lose the sprouts and the first buds , but not the second ones. This fact ensured the plant well-being and it was not even affected by the “hydric stress” provoked by the registered rains.

The vineyard as corollary produced few grapes but with no suffering from the plant.

Vintage 2019 was characterised by summer weather as hot and very dry in the Sorian soils. The heat wave registered by the end of June (flowering happened on 25 June) was 40ºC for 10 days and the same happened in the last days of July.

By 10 August 50%of veraison had been completed.

There was no rain till the first half of September when there were 40 liters of water accumulation.

The vineyard had a great vegetative growth in its leaves and stems in spite of the strong heat. The water excess of 2018 helped to relieve the consequences of the high temperature.

The situation of the extra vitality of the plant helped the wines from vintage 2019 to preserve a more evident intensity and at the same time an elegant balance.

In 2018 we have been able to witness the four seasons of the year in the vines of Soria.

Winter was characterized by cold temperatures with abundant rainfalls and a lot of snowfalls in January, February, March and even on April 10 and 11.

Vegetation woke up when expected; almond trees bloomed on April 3 and the sprouting started on April 27. Spring was featured by rain, cold temperatures and frosts on the 1 and 13 of May, which caused important changes in the plants ́ vegetative cycle.

Cold winter weather lasted until the middle of June. The sun appeared on June 19, bringing summer-like temperatures. Consequently, the vines started to flourish from June 21, and the cycle would extend until early July.

Summer with moderate temperatures of 30oC, was characterized by rain and scattered storms, which allowed the plants to grow and follow its vegetative rhythm until the end of July- vegetation usually stops its natural development in early July.

Accordingly, we witnessed a kind of typical Atlantic vegetative cycle, very unlikely in the Ribera del Duero in Soria.

August, September and October were marked by dry weather, with mild temperatures and many hours of sunlight which encouraged a slow maturation and the creation of complex aromas from the Tinto Fino and Albillo varieties.

2017 has been an early vintage although the almond trees in San Esteban de Gormaz had not flourished until 13 March, a relatively late date if we compare it with previous years.

Spring was cold and dry. We had a severe frost on 28 April with temperatures of -1oC which destroyed all the sprouts although luckily many buds had not sprung and were saved. Nevertheless, 30% of the harvest was lost. Flowering was very fast, it happened between 5 and 12 June. Taking this fact into account, we predicted a homogenous ripening and a quick harvest season we proved right.

At the end of June, there was an unusual heat wave, reaching temperatures of 38oC for 15 days, which made grapes acquire a thick peel and little pulp. In July high temperatures turned normal and minimum temperatures were rather cold, and we got 70 liters of rain on 7, 8 and 9 July (we were really looking forward to it).

We had an early ripening. It started 15 days earlier on 26 July. August had hot days and cool nights. We had 50 liters of rain on 27, 28 and 29. This situation kept the plants fresh despite the drought we had throughout the year. We had early “quitameriendas” (Colchicum montanum); we had them 3 weeks earlier than usual ( 8 September), foretelling the end of summer.

Le Rosé 2017 appears with a very pale pink colour, almost transparent. It develops hints of white peach, roses and fine wood aromas. In mouth it is creamy and soft in attack, continues soft and delicate in half mouth and finishes in a calcareous acidity which is originally common from the plot of Le Rosé.

The year of vintage began with a significant event: the roses budded in January, indicating that the beginning of the year had been warmer than usual in these Sorian latitudes. The intense cold began in March and we had the first snows around the middle of April.

The vines sprouted on 29 April, which has been the average over the last 50 years in Soria. In mid-May we had a cold spell that had a marked impact on flowering, which arrived late, on the 20 June.

The summer was dry, like the year of vintage as a whole. However, in the middle of summer, on 14 July, the minimum temperature dropped to 5 ºC and to 3ºC on 12 August. These cold spells enabled the plants to recover from the hours of sunlight.

In September we had some very hot weather with 37ºC on the 7th followed by rain from the 14th to the 16th with 12 liters per square meter, refreshing the plants which enjoyed a second youth. This aspect adds personality to the year of vintage and is locked into the wine’s memory.

Le Rosé is a direct, open wine from a recent year of vintage that does not hide its attributes
and shows its aromas conspicuously. The quantity and generosity of 2016 is discernible on the palate while transmitting precise flavors through a relaxed beginning and notable balance and fluidity. The great year of vintage and the “grand cru” join forces to provide a stunning result.

2015 is by definition, in both France and Spain, a seductive, ‘charmeur’ year, in which the calcareous terroir was tamed by the climate. The result is a wine perhaps not as powerful as the 2014 but rather a wine that is ‘done’, as we say in our trade, a wine which is already at its best. 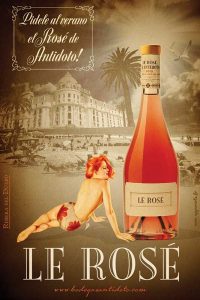 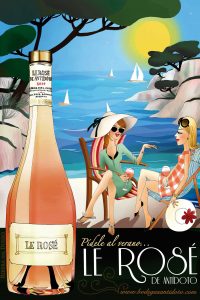 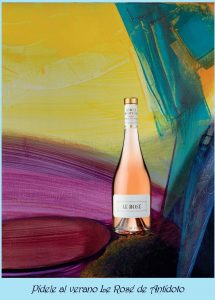 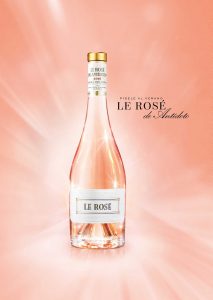 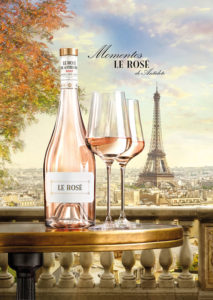