Bodegas Antídoto produces an ‘entry-level’ rose wine with a historical personality within the DO Ribera del Duero. This is Roselito, younger sister to Le Rosé. The traditional ‘coupage’ of Albillo and Tinto Fino from old vines result in this notably original wine.

Vintage 2020 is a generous one because of the amount of grapes collected, that is why we established a wise control on the whole cycle of the plant, which was growing like a `tsunami ́, from the very beginning.

Our aim was to stay very close to the vineyards with its generous fruit so as not to go against nature and, at the same time, to control the grapes to avoid their spillover when collecting. As a result, 6000 kilos per hectare of grapes were collected. The fruit of grapes was very good and generous, even in the Soria old vines.

The weather registered in February was really hot and it was not till March when it was cold.

We could noted down some snows in this period on 16 March. The generous rains in April gave way to a bud break on the 21 never ever seen in the Soria terroir before. This bud break appeared between 15 and 10 days in advance if compared to the year-on- year terms. These rains protected the plants from the frosts in spring.

In June, the dry situation took place after the period of the previous rains. The flowering happened on 15 June, and the veraison came 10 days before the normal days by the end of July.

August was the typical hot month without rain. A frost on the vineyard happened on 31 August without damage.

In September, we observed that the sun did not heat the same as the ending days of the summer in Soria with minimum temperatures between 5º and 10ºC. Besides, 33 liters of rain were registered on 20 September, to unify the ripening cycle of the grapes. Finally, the harvest was on September 24 and 25.

The wine: Roselito results in a full and generous `ripple ́, running in mouth in a calm and at the same time deep way.

In 2018 the changing of seasons in Soria ́s vineyards has been observed and appreciated. Winter was mainly cold with plenty of rains, a lot of snow in January, February and March and even on 10 and 11 April.

The vegetation awoke as usual, the almond trees bloomed on 3 April; the sprouting was registered in 27 April. Spring was marked by rain, coldness and unfortunately by the frosts on 1 and 13 May. This situation reduced by half the harvest in 2018.

Summer with moderate temperatures around 30oC characterized by rains and some isolated thunderstorms allowed the plants to grow and boost their vegetative cycle until the end of July where the vegetation normally slows down its natural growth at the end of this mentioned month. We meet a typical situation of an oceanic vegetative cycle not very frequent in the Soria Ribera del Duero.

From August to October it was dry and with moderate temperatures and plenty of hours of sunlight. This situation provided a slow ripening and the appearance of complex aromas of tinto fino and albillo.

Roselito 2018 characterised by an oceanic-type vintage displays a complex aroma of subtle flowers with hints of vegetal fragrance. On the palate, the acidity from the fallen rain during the whole year feels the taste buds and at the same time it draws the main structure of the Roselito 2018 as a whole.

A dry and early vintage gives birth to a wine with low acidity and very generous in aromas. In nose, “baroque style”. In the mouth it keeps the Roselito style from the old vineyards of tinto fino and albillo, however, this one is more full bodied than ever.

An early year though the almond trees were not in flower in San Esteban de Gormaz until 13th March, a late date if compared to previous years.

Spring was cold and dry. There was a hard frost on the 28th April with temperatures minus 7oC, sweeping all the vine buds away although many of the buds had not appeared yet and consequently, they were saved. Even so 30% of the wine harvest was lost.

The flowering was very quick from 5th to 12th June. As a consequence, we assumed that we would get a homogenous ripening and a quick harvest and that is how it was.

Just before the beginning of the summer by the end of June, there was a rare heat wave with temperatures reaching 38oC for a fortnight what made the grapes have a thick skin and little pulp.

In July, the maximum temperature was normal but the minimum ones were too cold and 70 liters of water were registered on the 7th, 8th and 9th July. The veraison was early, starting on the 26 July fifteen days before. In August the weather was hot during the day and cool at night. On the 27, 28 and 29th , 50 liters of water were registered which let the vines remain fresh despite the general drought along the whole year.

Colchicum montanum flowers („quitameriendas‟), which announce the end of summer, appeared sooner on 8th September, 3 weeks before they normally do. Therefore, Roselito 2017 harvest happened from 20th to 23rd September. It was a fast harvest as we predicted!

Roselito 2016 is a rose wine fruit of a mild year of vintage, with records of grape quality and quantity never seen before by Bertrand Sourdais since he arrived in Soria in 1999. We also noted a trait of this year of vintage as the existence of a summer drought that, as if by magic, did not lead to the plants suffering.

Roselito expresses itself with the delicacy of its origins in Soria, a fine elegant rosé wine ready to be loved by whoever tastes it.

The distinction of the year of vintage is perceived on the palate, noting a low acidity, that does not prevent the pH from remaining in very good parameters, giving the wine a sensation of subtle acidity. We are faced with a wine that is ‘done’, the result of a particular 2016 ‘millésime’ that has been transferred to the delicate palate of our Roselito. 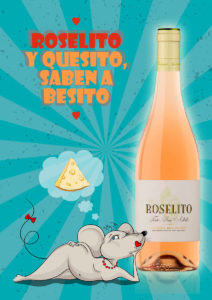 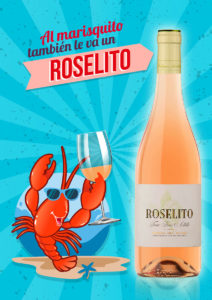 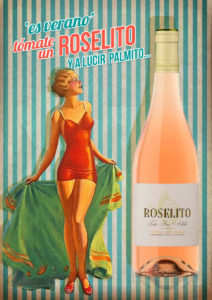 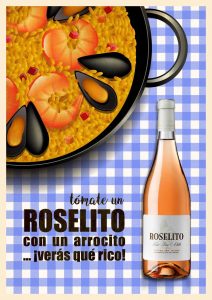 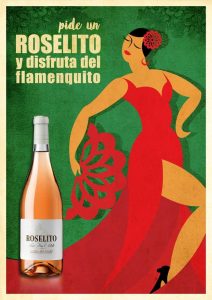 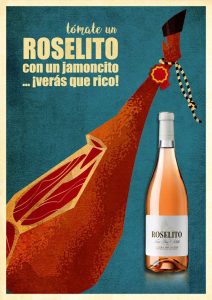 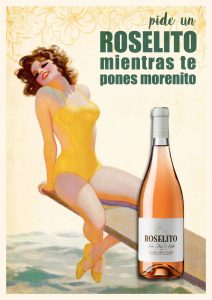